When I was a little girl, I had a thing for climbing trees. I realize I still do, when I see a juicy-looking tree and find myself automatically looking for footholds. Perhaps Enid Blyton had something to do with this, as most of her protagonists were expert tree-climbers, and I was very impressionable. The tomboy in me has died hard.

This is me and trees:

But this post is not about trees so much as it is about plants in general. Of late, I find myself obsessed with the idea of growing things, inspired perhaps by a mild form of envy (if other people can have a green thumb, so can I!) but also due to exposure to a bunch of articles posted by my horticultural friends on Facebook, the most inspiring of which was this.

I have tried growing things in my balcony, but my attempts grew half-hearted over the summer months, as the hotness of the sun and the harshness of the winds prevented my plants from faring well, giving up on it altogether as way too much work with too few benefits. But the story of this guy in London growing food in pots in his balcony has succeeded in galvanising me into action once again. Container gardening, here I come! 😀

My experimentation with seeds began when I attended a flower show earlier this year and saw a guy selling them. That flower show was responsible for quite a few things actually.

1. I realized gardening can be quite a happening thing.

2. Fellow human beings and inhabitants of Karachi seemed really into it.

3. Aforementioned people actually succeeded in growing stuff in their homes.

Here’s a glimpse of the flower show: 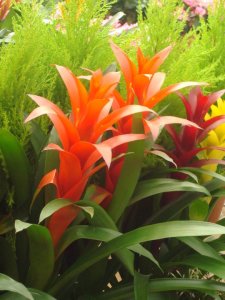 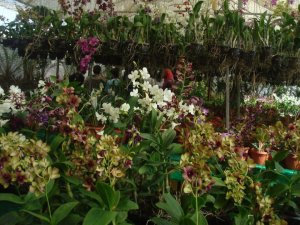 I ignored the orchids at the flower show altogether, as I didn’t relish the idea of watching them die in my not-quite-so-green-thumbed hands. I ignored the twisted, curly bamboos for the same reason. In fact, I walked out of the flower show without purchasing a single plant! (and this after spending at least 2 hours oohing and aahing over all the lusciousness). But like Jack in the fabled story (minus the admonishing mother), I found myself drawn to magic beans……

After buying a few packets, I walked out, went home, put the seeds in a drawer and promptly ignored them for several weeks. It required too much thought and the fear of failure was too high to actually go ahead and plant them. But one fine day (taking heart from horticultural Facebook friends, as well as my beloved aunt, a vegetable-growing diva, and also the new-found knowledge that crops CAN be grown in pots), I shed my horticultural chicken-shit-ness, donned my gloves and shady hat, picked up my spades, shovelled earth into pots and took the bull by the horns.

I planted cucumber, spinach, coriander, tomatoes, corn, chillies and basil that day. Out of these, spinach, coriander, basil and chillies proved very successful and I was overjoyed. The corn plants grew beautifully too, and I marvelled to see how the cobs grew like babies in a pregnant stem. Sadly, they died a stillborn death, the plants starting to wither after reaching the second trimester; and the tomato and cucumber plants grew madly, but never bore any fruit until they too withered away, as from an unconsummated marriage.

Feeling a bit defeated in my gardening ambitions, I abandoned them in favor of more fruitful pursuits. Like blogging. 😛

Then I came across that article about the London guy……

Happily, the rejuvenation in my ‘growing’ mood has coincided with sowing season. Not to be daunted by my earlier failures,I set to work once again (the old fiend-like determination setting in), and with a little bit of experience this time round, I set the ground for some serious crop-production. I lugged whatever pots I had, all shapes and sizes, filled with soil, from the downstairs courtyard into my balcony, a back-breaking and thigh-cramping job requiring multitudinous jogs up and down the kitchen stairs. No help whatsoever. Just me and my achy muscles.

I’m going to do things right this time….more focus….more vigilance. I got myself more magic beans too, and have planted capsicum, lettuce, strawberries, green beans, and am giving spinach, coriander, cucumber, tomatoes, chillies and corn another shot.

My sowing frenzy came to a screeching halt when I realized I had too many seeds and not enough pots. I DID acquire more (through some very sly and underhanded means, details of which are known by only a select and privileged few) [you know who you are guys], and continued the good work. This is how Project Balcony has shaped up so far: 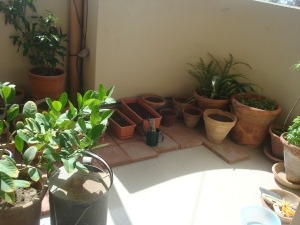 (Six more pots have been added to this lot today. Will post an update to let you know how the plants are faring in a months time with some, hopefully, VERY much greener photos)