Contents of a certain bedside table:

pouch full of keys to all the doors in our apartment, including a set that belongs to an ex-neighbour from our previous apartment

some unmentionables (due to PG nature of blog)

a little cylindrical tin with red candle inside

While sorting out Huz’s bedside drawers, dusting, throwing away stuff, keeping things that needed to be kept, I came across this object you see featured in the pictures.

It’s a a cinnamon-scented candle that has been used a bit, but not entirely, and it made me think of a Valentines Day years ago, before Amu was even an involuntary twinkle in either of our eyes…

The day was going by unremarked (remember what I told you about Huz in this here post?) and I was debating whether to be mature and not care, or pouty and resentful at the lack of flowers.

After all, we DID scoff at traditional notions of love and romance, thumb our noses at candle-lit dinners, pooh-pooh consumerism and such. 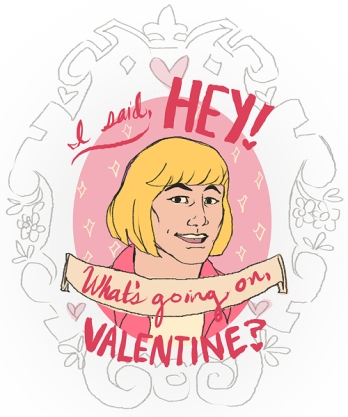 But in my mind I went back to the days when the boys showered the girls with rose petals from the school roof…..heart-shaped cards were handed around…….someone gave someone a stuffed toy…..a long-stemmed rose……a mixed tape…..and oh the thrill of someone walking up to you to deliver a card sent by a secret admirer….

In a fit of nostalgia for days past, I felt compelled to walk into a store and buy something corny, just for the sake of it.

This little object caught my eye….and when I opened the lid I got a heady whiff of cinnamon. 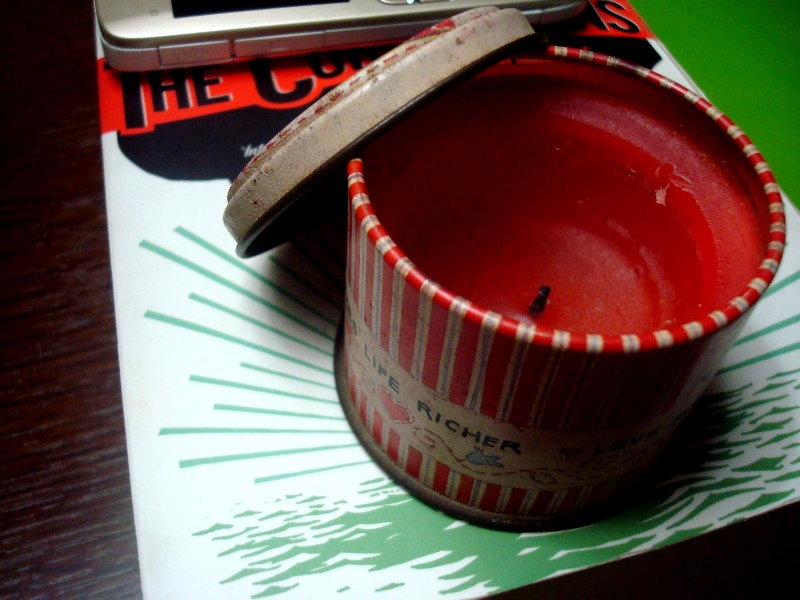 I paid for it, went home and gave it to Huz, feeling silly. Huz looked at me with a ‘but I didn’t get YOU anything’ expression, and as a result, I felt justified in feeling righteous and indignant.

Fifteen years later, I pick up the rusted little candle container, take off the lid to smell it, and realize it doesn’t even smell like cinnamon anymore.

Yet here it is, still in Huz’s drawer, even after so many years and I searched in my heart to see if I could find any sentimental attachment, or if Huz would miss it. The only thing redeeming it was that it had just been around for so long.

Then I finished organizing the drawer and beamed at the clean-ness of it all. I usually leave his crap alone until some years go by or until my innate obsessive-compulsiveness vanquishes his protective paranoia.

Later that night, as I was about to turn off the light and crawl into bed, my eye caught sight of the candle lying amidst the other junk I had thrown into the dustbin.

Nope, couldn’t do it.

A friend posted this song the other day and I just loved watching and listening to it, firstly because there’s something very cool about people who can just sit on a sofa and strum a guitar (not to mention play riffs!) and belt out a song sung by the late Nusrat Fateh Ali Khan and make it their own.

And there’s something so charming about a man singing about longing and love. 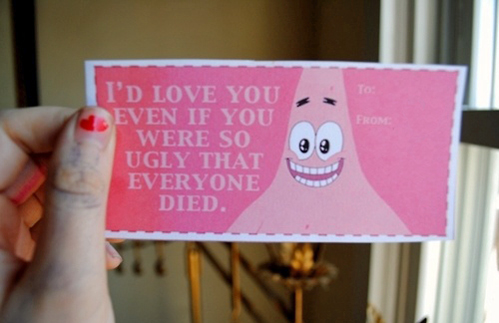 26 thoughts on “The bag lady wins”

Your turn to say something Cancel reply