Of late I have been more prone to pick up my camera than my pen and have clicked a few pictures I’m going to start posting one by one on Mun-Zooms, my photo blog.

I have also been busy OCDing, organizing and cleaning and dejunking cabinets, cupboards and drawers systematically.

As I dashed around the house, full of beans due to the Kundalini yoga my sister Fats made me do with her yesterday, I glimpsed a pigeon sitting on a ledge outside Amu’s window. It was trying to peer into the room with its beady orange eye, bobbing and tilting its head side to side. I couldn’t help stopping in my tracks and laughing a little, then scooted off to grab the camera from my room.

Just as I trained the lens on it and fiddled with the focus, wouldn’t you know it, it flapped its wings noisily and took off, so that particular pigeon lost its chance at being gawked at on my blog 🙂

Then I remembered noticing a pigeon through the side of an open window on our landing, nesting in the building duct and since I had a camera in my hand, I stepped out to see if it was still there.

Thankfully it was, so my need to capture a pigeon today was fulfilled. Here’s one of the pics I took. 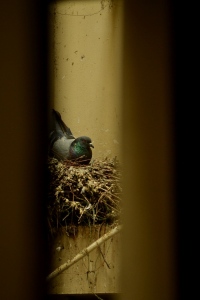 Dear readers of Munira’s bubble, do subscribe to Mun-Zooms if you haven’t already. There’s not much to read there, just photos, so go ahead, don’t be afraid 😛 Plus, you’ll get to see the humungus version of this photo. FTW!

View all posts by Munira