Little billi/demon kitty was a very difficult kitty to put a name to. I think the reason why it took us two months to settle on something that stuck is because of the uncertainty regarding her future with us. Dr Isma, while prescribing a treatment for poor Fuzzy’s stress tentatively asked if it was possible to find another home for the little rescue. And though we asked around on social media as well as in person it seemed like a halfhearted attempt, because quite simply, we were in love with her. Here is why. 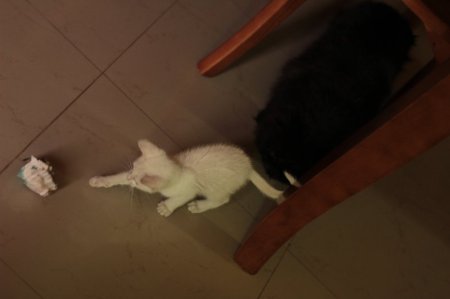 1. She goes nuts with scrunched up newspaper and little rubber balls.

2. Curls up to sleep, purring like a fridge, on everyone’s neck/shoulders.

3. Looks deep into eyes, then touches cheek with paw.

4. Follows me everywhere and seems genuinely interested in the way I fold laundry/chop vegetables/exercise/scoop poop from litter with spade.

5. Carries her toys in her mouth (thread spools, newspaper balls, rubber bands) and deposits them in her basket.

6. Likes to sleep, neatly curled up in her basket, if no humans available.

8. Likes sleeping on warm spots, like laptops and chargers and pools of sunlight.

10. Plays hide and seek with Amu’s hand under blankets.

12. Attempts to chomp on everything.

13. Boops my nose affectionately, purring, and licks it.

14. Licks my hand if I pet her when she’s grooming herself.

15. Acts like every funny cat video I have ever seen.

16. Entertains by mad dashing, sliding, and falling off surfaces.

19. Tries to cover up food she can’t finish.

20. Tries to cover up playthings when she’s done playing.

21. Is easily distracted by moving objects and wants to touch, very dangerous when object happens to be the needle of a sewing machine.

22. Carries things in her mouth and drags them around the house, like shoes by their shoelaces, or stoles by their tassles.

23. Just pushed my pen cap off the table and proceeded to swat it around the floor.

24. Takes kibbles out of her food bowl with a delicately curved paw and swats it around for a while before chomping it.

25. Eats weird things, like feathers and thread and potato peels.

26. Crouches and pounces and ambushes from her hiding place under the bed.

27. Talks to pigeons outside the window.

28. Talks to flies and moths. If she manages to catch them with her paws, she eats them.

We debated names like Nutsy, Smelly, Jinni/Ginny, Pagli, and a few more I can’t remember anymore. The latest is Mini, which seems to suit her just fine.

So it seems she is around to stay, since there are no takers, and because I could never be convinced anyone could love her as much as we do.

Perhaps Fuzzy began to sense a shift in our loyalty which is why he lost his appetite/refused to eat anything with antidepressants in it. My problems with him were far from over. Mini’s playful attacks were becoming increasingly aggressive, and so were Fuzzy’s response to them. I began to fear Mini would get hurt soon, for though she was all tooth and claws, Fuzzy was still the bigger cat and he did, almost reluctantly, fight back in self defence.

Still, I was struck by horror at what happened that fateful evening when I gave Fuzzy a bath and he became unrecognizable to Mini.

It turned out to be one of the most frightening events in my life, and a complete game-changer as far as the future of the two cats as co-habitants was concerned. 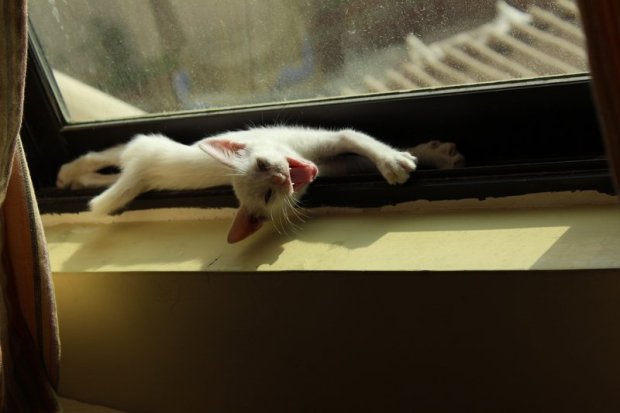